Review: The New Religious Intolerance: Overcoming the Politics of Fear in an Anxious Age by Martha C. Nussbaum 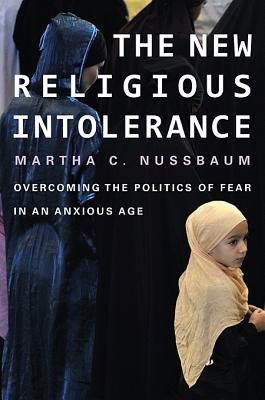 How can the industrialized, formally democratic societies of Europe and North America increase religious pluralism? European nations "have understood the root of nationhood to lie first and foremost in characteristics that are difficult if not impossible for new immigrants to share. Strongly influenced by romanticism, these nations have seen blood, soil, ethnolinguistic peoplehood, and religion as necessary or at least central elements of a national identity." (p. 13) Other nations, such as the United States and India, define "nationhood in terms of political ideals and struggles," thus somewhat opening the door. (p. 16)


While understanding nationhood as a political ideal facilitates religious pluralism, the chief determinant is a society's response to fear. Fear begins with a genuine problem. It "is easily displaced onto something that may have little to do with the underlying problem but that serves as a handy surrogate for it, often because the new target is already disliked." Fear is amplified by the enemy's disguise ("They pretend to be like us."), which can only be penetrated by the racist, xenophobic, patriot or religious bigot's superior insight. Humans share the emotion of fear with many other animals, and it is no doubt biologically necessary, especially in pre-agrarian societies. But "human beings [in industrialized societies] have to make decisions in a world for which evolution has given them only a very rudimentary preparation." (p. 29):


Fear is a "dimming preoccupation": an intense focus on the self that casts others into darkness. However valuable and indeed essential it is in a genuinely dangerous world, it is itself one of life's great dangers. (p. 58)

So how can human societies choose wisely despite genuine and misplaced fears?


I'll be arguing that to get a handle on our fears we need a combination of three things: sound principles involving respect for human equality; arguments that are not self-serving, targeting an alleged fault in the minority that is ubiquitous in the majority culture; and a curious and sympathetic imagination. But first we need to understand more about fear and how it works. (p. 21)

Chapter 3 discusses the first of the three legs of Professor Nussbaum's stool of religious pluralism, sound principles. If one accepts that all humans deserve dignity, regardless of their physical traits or social status or capacity for reasoning, and, if one rejects the extreme argument of the ancient Stoics that outward circumstances can never injure a person's conscience (an expression of dignity), then "we get the principle that liberty should be both ample and equal." (p. 68)

The Anglo-American legal tradition is a result of the migration of Europe's religious dissenters, which, when combined with the religions of the Native Americans, created a religious pluralistic population. The Americans rejected "toleration" as a feature of hierarchy and adopted freedom of religion as an expression of inherent natural rights. The effort to define the proper standard for government to protect liberty of conscience found expression in two strands of thought which have persisted in United States jurisprudence until today. The first is associated with John Locke, a seventeenth-century English philosopher. The government is forbidden from enacting laws which penalize religious belief and discriminate against practices, although they may incidentally impose burdens upon those practicing them. The second tradition, which Dr. Nussbaum supports, calls for accommodation of religious minorities practices, including atheists, since laws will typically reflect the majority's practices.

Chapter 4 exposes many instances of majoritarian suppression of minorities' doing things the majority does. She uses various European nations' restrictions of clothing associated with Muslim women to illustrate how this pattern of selfish thought threatens religious freedom.

Chapter 5, "Inner Eyes: Respect and the Sympathetic Imagination," is, in my opinion, the most important for readers of this blog. In political science terms, it's like the development of soft power for oppressed minorities:


From now on, then, I'll be focusing on works that help the imagination break out of its narcissistic moorings close to "home," by challenging it to inhabit the reality of a life that is in some respects distant or difficult. (p. 148)

The literary examples of such works include Ralph Ellison's The Invisible Man, Roger Williams's A Key into the Language of America, Gotthold Ephraim Lessing's Nathan the Wise, George Eliot's Daniel Deronda and Marguerite de Angeli's Thee, Hannah! and Bright April. She went into depth in discussing how the last four authors' opened the possibility of sympathetic consideration of the majority for Native Americans, Jews, Jews and African-Americans, respectively.


In effect, our authors have a triple task: first, to present true facts; then, simultaneously, to lure people's imaginations into that world and entice them to care about the people they find there; finally, to convince readers that the people there are not actually disgusting or evil but deserving of friendship and respect. (p. 187)

My only concern with this chapter is that, by using as examples authors who are members of the majority, Dr. Nussbaum leaves unanswered the question of a minority group's agency in this process. When a minority is most repressed, conversations about it occur without any of its members' participation. For example, a major milestone in perceptions of African-Americans was Alex Haley's Roots and the subsequent mini-series. Does Dr. Nussbaum believe that these self-expressions have limited effect unless a member of the majority precedes them?

Professor Mohammad Fadel, in June 2012, wrote a resource paper for journalists and public intellectuals to use when talking about Muslims. In it, he wrote:


In such an atmosphere [of the "war on terror"], American Muslims were subjected to a virtual inquisition, their words and actions placed under continual scrutiny, to determine whether they held any questionable beliefs. If so, they were subject to exclusion from public life. In the worst cases, sting operations were launched against individuals in the hope that they might be induced to commit a manufactured crime. A community faced with what amounts to a systematic inquisition of its beliefs, doctrines, and practices is obviously in no position to defend itself. ... As a result, American Muslims have been effectively silenced and excluded from public discussion of their own faith, not to mention important public issues regarding the future of the “war on terror,” the country’s relationship with the Muslim world, and the future of peace in the Middle East. In such circumstances, the obligation to defend Muslims’ status as equal citizens in the American political community has necessarily fallen on the shoulders of non-Muslim individuals and civil society institutions.

I've tried as much as possible in this blog to highlight and support North American Muslims' own expressions. Maybe I've imbibed too much radical and black nationalist thinking, but I've become unconcerned about the level of non-Muslim support of Muslims.

Having said, that Dr. Nussbaum's book is quite supportive, and I appreciate it. And thinking more about it, I'm a member of the American Civil Liberties Union and Americans United for Separation of Church and State, both of which are liberal, not radical, organizations. (Gulp), I'm probably a liberal.

Chapter 6 is an examination of the Park 51/Cordoba Institute ("Ground Zero Mosque") controversy in the light of the three necessary characteristics to overcome some people's fear.

Chapter 7 is a conclusion reiterating the importance of the imagination in establishing pluralism.

When we read this book, in addition to seeking ways to improve their own situations as minorities in industrialized societies, we Muslims should also consider how to escape our own narcissism. The audio quality isn't great, but listen to this lecture by Junaid Jahangir entitled "The Cycle of Hate." He lists the human rights abuses Muslims perpetrate against minorities in Muslim-majority societies.

Finally, I hope the author changes the book cover, pictured above, in any future printings. I guess I'm just tired of Muslim women's clothing being such a focus of attention, from both Muslims and non-Muslims. It also reminded me of the regrettable promotional poster for Showtime's Homeland.

Update 2015-04-10: Genocides of Native Americans and Jews occurred after the aforementioned works were published. The situation of peoples of African descent in the Americas varies and has obviously improved, but, in the United States, large gaps exist in most measures of well-being between the majority European-Americans and African-Americans. One could argue that this does not belie Dr. Nussbaum's analysis but instead increases the urgency of widening the imaginative space of the other. Or one could argue that the liberal project is unable to accommodate true pluralism. One alternatives would be ethnic nationalisms such as Zionism and Black Separatism. Others may argue for a radical solution which would allegedly solve these problems, such as socialism. Not sure. Just thought it was important to point out that long-term, religious pluralism has not had a great history of success.

Update 2015-04-11: In the previous passage, I wanted to add "political Islam" as an alternative some might seek to liberalism, but I didn't want to dignify it with the term radical. I guess it's closest to an ethnic nationalism, with the particular defect that, when it fails to solve actual problems, it attempts to increase its purity by expelling people from its "promised group" status.

Update 2015-04-12: A book with similar themes which I reviewed favorably was Anouar Majid's We Are All Moors. Professor Anouar focused on the Reconquista as the model Europeans created to strive for purity.


Yoda: Fear Leads to the Dark Side