Are Muslims Going to Join Calls for Censorship in Public School Libraries? I Hope Not 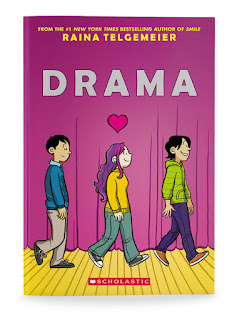 In Columbia County, Georgia, where I live, the daily newspaper in neighboring Augusta, Georgia reported that a resident has been advocating that the Board of Education remove Drama by Raina Telgemeier from its middle school libraries and update its media policy to inform parents that "Media Centers and Teacher Libraries may provide material containing sensitive topics such as sexuality, homosexuality, and/or transgender ideology."

I have previously reported on my county's censorship of reading materials in public schools (more here). I oppose discrimination against LGBTQ people and don't believe the party line in our religion about a lot matters related to sexuality. I'm also opposed to the people who typically advocate for imposing morality. Nevertheless, before spouting off, I bought and read the book.

Most of the book is about drama programs in school, i.e. putting on plays. The characters work hard, do varied tasks and cooperation and teamwork are essential. I had for some reason disliked the drama students in high school. Reading this made me regret my prejudices and wish I'd at least given it a shot. 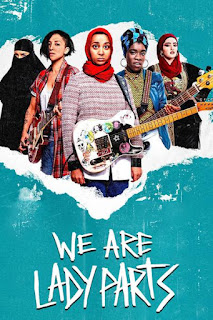 I enjoyed Nida Manzoor's We Are Lady Parts on Peacock TV, but I didn't have the words to explain to readers of this blog why I did. Thankfully, Hind Makki did find the words!

If you mute the electric guitar, most of us will recognize these women from our own lives. But why would you want to lower the volume?

The songs by @weareladyparts are available in #USA on @Spotify https://t.co/B6TtonUezp

Rabia Khokhar (Twitter) is a Teacher and Education and Equity Consultant. Check out the resource she produced entitled Reading Challenger: Centering Muslim Characters.

I read about this from Jeremiah Rodriguez's June 21, 2021 article at CTV News.

I have not read any of the books in Rabia's list.

Sympathy and Get Well Soon Cards Designed for Muslims

I'm not sure how, but I've accumulated greeting cards over the years. I generally keep them in a box, and, when I have an occasion to send one, I sift through the box looking for the appropriate card.
After sending a condolences card to a friend on the occasion of the death of his father, I realized I had a surplus of birthday greeting cards and no sympathy and few "Get Well Soon" cards. So I Googled "buy sympathy cards online muslim," skipped Hallmark and found myself in Etsy. After figuring that out, I have produced two public lists, one for Sympathy cards and the other for Get Well Soon cards which met my Muslim aesthetics. There is some overlap between the two lists.
I've also ordered from As the Heart Heals.
So, as I receive them, in sha Allah I'll update this to confirm that the vendors were legit. Also, the Etsy vendors were mostly from Canada and the United Kingdom. Do USA vendors use another platform?
Posted by Ayman Hossam Fadel

Free eBook: "An Army Like No Other: How the Israel Defense Force Made a Nation" by Haim Bresheeth-Zabner

The Israeli government may speak of peace, but they have developed an arms industry that is one of the largest in the world. In light of the ongoing violence, we've made An Army Like No Other - a history of Israel and the IDF - free to download: https://t.co/vPVT3fCFcO pic.twitter.com/Gvjkn4P7rW

In this groundbreaking book Israeli historian Ilan Pappe examines the most contested ideas concerning the origins and identity of the contemporary state of Israel. pic.twitter.com/SAlqP6Kvxp

Palestinian filmmaker Elia Suleiman to stream all his films for free https://t.co/AX4qGDbkGN

The streaming is through the Eventive platform. Register for the films and Elia Suleiman's talk here.
Posted by Ayman Hossam Fadel

Saqi Books - Free eBooks on Palestine - Available Through May 17, 2021

Check out this great offer from Saqi Books. Free ebooks on Palestine through May 17, 2021.