The November/December 2018 issue of Islamic Horizons has an article by Kenneth Wahrenberger describing some of the contents of the newly reopened Penn Museum's Middle East Galleries. (click to enlarge)

The Penn Museum is located in Philadelphia, Pennsylvania, USA. Plan your visit!
Posted by Ayman Hossam Fadel Links to this post

I hope library users in my state of Georgia would request these materials. Remember, if your branch library doesn't have a book you want, you can request the branch library to retrieve the book from other participating libraries. You can do this online with a PINES account or at the circulation desk. Also note that some public libraries don't participate in PINES, particularly those in Atlanta.

I've reviewed children's books on this blog.
Posted by Ayman Hossam Fadel Links to this post


The web site of the New York Islamic Arts Collective is https://www.nyislamicarts.com/. The exhibit is scheduled to run at the Al-Hamra Art Center through January 20, 2019. Here's a map.

Favorite Quotes: Carlos Ruiz Zafón on War in "The Shadow of the Wind"

Nothing feeds forgetfulness better than war, Daniel. We all keep quiet and they try to convince us that what we've seen, what we've done, what we've learned about ourselves and about others, is an illusion, a passing nightmare. Wars have no memory, and nobody has the courage to understand them until there are no voices left to tell what happened, until the moment comes when we no longer recognize them and they return, with another face and another name, to devour what they left behind. (p. 428)

I don't know Spanish, but I think I've found the passage in the original text:

"Negroland: A Memoir" by Margo Jefferson

An idea which struck me was her insistence that contemplation of suicide is a civil right or privilege which blacks in America should seek to earn:


But one white female privilege had always been withheld from the girls of Negroland. Aside from the privilege of actually being white, they had been denied the privilege of freely yielding to depression, of flaunting neurosis as a mark of social and psychic complexity. A privilege that was glorified in the literature of white female suffering and resistance. A privilege Good Negro Girls had been denied by our history of duty, obligation, and discipline. Because our people had endured horrors and prevailed, even triumphed, their descendants should be too strong and too proud for such behavior. We were to be ladies, responsible Negro women, and indomitable Black Women. We were not to be depressed or unduly high-strung; we were not to have nervous collapses. We had a legacy. We were too strong for that. I craved the right to turn my face to the wall, to create a death commensurate with bourgeois achievement, political awareness, and aesthetically compelling feminine despair. (pp. 171-2)

I've never been very good dealing with people with depression, and I criticized Jay Asher's Th1rteen R3asons Why.

Here's a passage on housing segregation in Hyde Park, the home of University of Chicago, in the 1960s (p. 147): 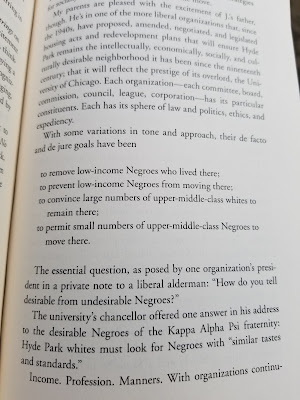 Here's a passage about the mental price Margo Jefferson paid as a child trying to navigate the rules of race, gender and class which had been imposed on her and how her adult life has been an attempt to become "a person of inner consequence." (p. 156) 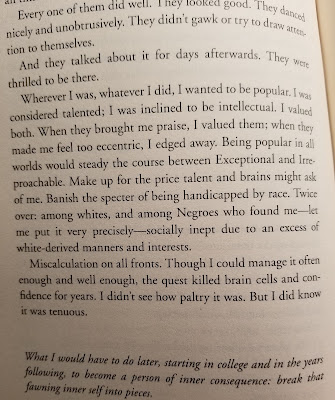 From p. 97, a description of  "Hollywood studio manager Monroe Stahr, clearly based on Irving Thalberg (head of the film company Metro-Goldwyn-Mayer), whom Fitzgerald had encountered several times." (Wikipedia)


Like many brilliant men, he had grown up dead cold. Beginning at about twelve, probably, with the total rejection common to those of extraordinary mental powers, the "See here: this is all wrong -- a mess -- all a lie -- and a sham --," he swept it all away, everything, as men of his type do; and then instead of being a son-of-a-bitch as most of them are, he looked around at the barrenness that was left and said to himself, "This will never do." And so he had learned tolerance, kindness, forebearance, and even affection like lessons. (emphasis in original)

The British Mosque: An Architectural and Social History by Shahed Saleem

Rowan Moore reviewed The British Mosque: An Architectural and Social History by Shahed Saleem in The Guardian on March 13, 2018.

A mosque is more about process, argues Saleem, than it is about the finished product. It is about the often slow, “iterative” business by which a community defines its needs, finds a site, raises money and commissions a building.

Mosques, he says, are “vehicles for the dynamic reconstruction of tradition” and their conservatism can be explained as a reaction to both racism and homesickness for countries of origin.

His own preferences do, however, become clear, in a non-traditional mosque that he has himself designed in Bethnal Green, London. He also likes the abstractly Islamic Cambridge mosque, now being built to the designs of Marks Barfield, architects of the London Eye. And, surely, the future of mosque design should indeed be about finding a British Islamic way of building to stand alongside – rather than copy – those of the Mahgreb, or Turkey, or the subcontinent. Just don’t expect this transformation to happen quickly.

I have not read the book. Find it in a library near you.
Posted by Ayman Hossam Fadel Links to this post

[Spoiler Alert] On AMC's The Walking Dead, in Season 8, Episode 9 "Honor," as Rick Grimes (Andrew Lincoln) is burying his son Carl (Chandler Riggs), he repeats the mantra "My mercy prevails over my wrath."


This is a translation of a passage in Sahih al-Bukhari, an important collection of narrations about the deeds and words attributed to the Messenger Muhammad ﷺ:

Allah's Messenger ﷺ said, "When Allah completed the creation, He wrote in His Book which is with Him on His Throne, "My Mercy overpowers My Anger."

Hey Creative People! Is it the right time for a remake of "The Prisoners of Quai Dong" by Victor Kolpacoff?

My local public library regularly removes books from its shelves for a variety of reasons. I purchased about 15 boxes of books through the Friends of the Library, a volunteer organization which sells these books to fund efforts to support the public libraries in my city. I've sold, exchanged and given away most of the books in those 15 boxes. Recently, I received an order through my Amazon store for The Prisoners of Quai Dong by Victor Kolpacoff. Before fulfilling the order, I read the book. I can't do a proper review of it, but I wanted to give you creative people out there a heads up that this book may be a productive basis for a play or movie or a graphic novel.

Read more »
Posted by Ayman Hossam Fadel No comments: Links to this post