CW's Containment Will Make You Scared of ... Brown People! 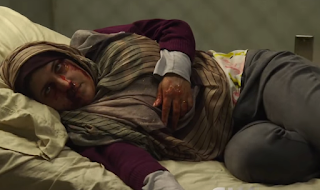 Updated 2019-May-25. I did watch the first season, and the show never had a second season. It turns out the Syrians weren't responsible for the outbreak. We learn several episodes later that corporate shenanigans were responsible. I don't believe the plot "twist" absolves the show from the criticisms I and others made. #1, the images of panic & disease and flatness of the "Syrian" characters won't leave viewers' subconscious minds, regardless of the story. #2, many viewers won't ever watch the later episodes. #3, many viewers will come away with the conclusion that, "We had a close brush with civilizational-ending bioterrorism because of these migrants. We really ought to just stop them coming to avoid the risk." #4, even when the characters learn that their suspicions about the Syrians was unfounded, they never actually discuss them at all.

CW's Containment Will Make You Scared of ... Brown People!

These comments are based on watching the first two episodes of The CW Network series "Containment."