I have not seen the movie.
Posted by Ayman Hossam Fadel Links to this post 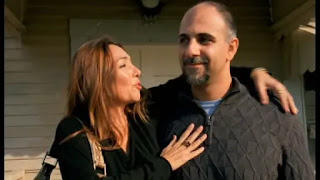 In "Un-American Graffiti," episode S3E16 of Veronica Mars, a brother of a veteran wounded in Iraq vandalizes "Babylonian Gardens," a restaurant run by naturalized US-citizen "Arabs," no nationality mentioned. There are a number of ethnic stereotypes and tropes the episode uses which I hope producers and writers will avoid in the future. But, in the wake of the Charleston massacre, there's a larger issue of the portrayal of non-white victims of white perpetrators' hate crimes.

Review: The Condemnation of Blackness: Race, Crime, and the Making of Modern Urban America by Khalil Gibran Muhammad 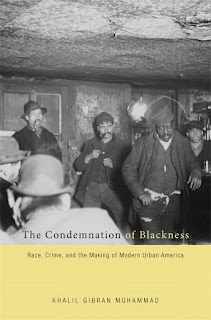 The Condemnation of Blackness: Race, Crime, and the Making of Modern Urban America by Khalil Gibran Muhammad

I reviewed this book through a series of Twitter status updates using the hashtag #coblackness.

Publishers's description: Lynch mobs, chain gangs, and popular views of black southern criminals that defined the Jim Crow South are well known. We know less about the role of the urban North in shaping views of race and crime in American society.


Use Worldcat.org to find the book in a library near you.

I've quoted extensively from the last 200 pages of the book. For some reason, I did not quote much from the first 100 pages. Looking back, I guess I assumed that the scientific racism of northern whites and the Victorian-moralizing of reformist blacks covered in those pages seemed so dated that it would have little relevance to explaining contemporary conditions. Yet a major theme in the book is the continuity of white practices towards blacks with the variance in whites' justifications for those practices. Thankfully, black Americans, in general, discarded accommodationist, reformist rhetoric, even when combined with critical observations of the harmful effects of white supremacy on blacks, for activist demands for equality regardless of "Negro criminality" and rejection of racial explanations for inequality.

Coincidentally, an Augusta, GA columnist wrote Today’s Chicago More Dangerous for Blacks Than the “Lynching South,” which, to me, continues the white American tradition of using black crime as an excuse to do nothing about racial inequality in the United States. So I wish all those who respond with "black on black crime" to every demand for justice in the wake of extrajudicial killings of blacks, whether by police or white vigilantes, would read this book.

Neil Drumming wrote an article in 2012 about the recent positive trend to portray sophisticated black criminals.

A major litmus test for credibility among [Progressive Era] liberal experts on the Negro Problem was the degree to which one conceded blacks' shortcomings. (commenting on John Daniels's "In Freedom's Birthplace: A Study of Boston Negroes. [p 138]

James Samuel Stemons, a black activist from Philadelphia, contrasted demand of blacks to save themselves while "greatest concern" expressed for poor whites. p. 168

Appeals to whites for racial reform depended on black leaders' willingness to traffic in rhetorical currency of black inferiority. p 189

#coblackness #police: blacks [in Cleveland] could w/o contradiction say that they received both too little & too much pic.twitter.com/eYJB8uJOJ6
— Ayman Hossam Fadel (@aymanfadel) July 19, 2015 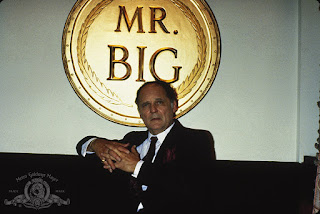 Mr. Big from 1988 satirical film I'm Gonna Git You, Sucka not too far from historical reality.


... the Great Migration changed the degree to which middle-class blacks would step up their commitment to crime fighting in the 1920s and 1930s, and more firmly ground the national debate over black criminality in terms of structural inequality and racial discrimination. The criminalization of the race because of white reformers' unwillingness to apply crime-prevention strategies in black communities, the intensification of racial violence among white citizens and police officers, and the more militant attitude of middle-class blacks toward achieving economic and social justice all converged during the next two decades to place black criminality near the forefront of an emerging civil rights agenda. pp. 224-5

This echoes in today's #CVE rhetoric which calls for "moderate" Muslims to police "extremists."
When #Philadelphia blacks armed themselves 4 self-defense, politicians & police used that to further criminalize them. p 204


Yes, blacks have been catching hell in North America for a long time. Tell it to your relatives at your next family gathering when they start talking nonsense.

Finally, for Muslims in the United States and other European-dominated nations, there are lessons for evaluating "counter-terrorism" and "countering violent extremism" programs. The dominant society neglects inequality because "terrorism" is the only metric for Muslim life in the nation, just like "crime" became the only metric or lens through which to view African-American life in the USA. Arun Kundnani's book The Muslims are Coming! does an excellent job of critiquing this dynamic. Of course, the impact on non-black Muslims living in these 21st century nations has not approached that of the impacts Khalil Muhammad describes.

We enjoyed having him on! RT @Harvard_Press: Khalil Gibran Muhammad talked to @hereandnow about the "violence card" - http://t.co/iXhA8Bma
— Here & Now (@hereandnow) April 18, 2012

Updated August 4, 2015. I completed my first Richard Wright reading today. I found the afterword Arnold Rampersad wrote to Wright's "Rite of Passage" germane to this topic. (click image to enlarge) 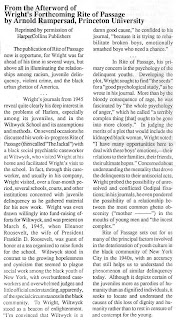 
Trailer to Omar Sharif's final film, the short film releasing later this year: '1001 Inventions and the World of Ibn Al-Haytham.'

If @DawudWalid doesn't get to his goal, he won't get any of the funds 4 his awesome book project! Help! https://t.co/7LtXfHAGQv #islam

I have not seen the app.
Posted by Ayman Hossam Fadel Links to this post