Review: "The Holy Vote: The Politics of Faith in America" by Ray Suarez 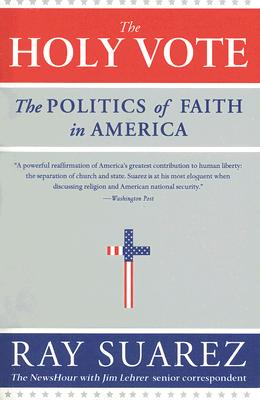 The Holy Vote: The Politics of Faith in America by Ray Suarez is a good introduction to policy discussions with religious claims in the United States in 2006, the time of the book's publication. Some of those issues have waned and new ones have arisen, and, if you've read other books I've reviewed on this blog under the tag Establishment Clause, you may not find these chapters exciting.

Mr. Suarez's style, in this age of bombastic partisanship, is frustratingly documentarian. He includes lengthy quotes from people whose positions he opposes. He avoids snarky rejoinders. Maybe his long years at the United States Public Broadcasting System, which depends on funding from the government and thus must garner support from many diverse sectors of our nation, have increased his ability to listen respectfully to others beyond that of those who publish in ideological Internet news sites, corporate media and crazy, egotistical bloggers like myself!

The editor of The Message International, Mahbubur Rahman, wrote a review of Dwell in Tranquility - An Islamic Roadmap to the Vibrant Marriage by Kamal Shaarawy. I have not read the book.