Review: The Secret World of Oil by Ken Silverstein 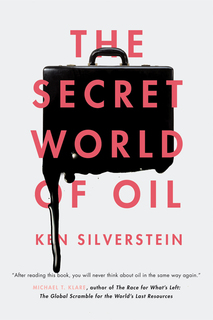 Note that the author of this book is not this Ken Silverstein, who writes in energy industry publications.

If you care about the poor or the environment, be prepared to vomit in your mouth at nearly every other page of this account of the oil and other resource extraction industries.

Ken Silverstein devotes a chapter to each of the following categories of players in this woeful tragedy: the fixers, the dictators, the traders, the gatekeepers, the flacks, the lobbyists and the hustlers.


While varied dictatorial regimes from Africa and Asia figure throughout the novel, Silverstein profiled Teodorin Obiang, the heir apparent to Teodoro Obiang Nguema Mbasogo, the dictator of Equitorial Guinea.

Have you ever heard of Glencore? It makes mountains of money trading rights to exploit natural resources around the world.

Do you know George W Bush's torture consiglieri John Yoo (and here), who also happens to heartily approve of Barack Obama's warmongering? Before him there was Ronald Reagan's legal yes-man Bretton Sciaroni, who wrote memos explaining why it was legal for the United States government to aid the Contra terrorists killing Nicaraguans. Do these guys end up in prison or at the end of a noose like Nazi war criminals? Yoo is teaching at University of California - Berkeley, and Sciaroni, who talks with Silverstein without the slightest recognition of himself as a sleaze, is a potentate in Cambodia.

If you ever have the opportunity to throw your shoe at Tony Blair, do so with righteous anger. Before you read the chapter about him, you may want to have some inanimate object close by that you can destroy. At least write and perform a song about him.

BTW, President Clinton and Secretary of State Clinton could have had a similar chapter written about them.


Bill Clinton was paid $250,000 by the US-Egyptian chamber of commerce a year after Clinton called Mubarak her friend http://t.co/WcOM96OP2P
— Zaid Jilani (@ZaidJilani) February 26, 2015

Lest you think that resource extraction only impacts politics in the Third World, read the chapter on Louisiana, featuring conflicts between Republican landowners and Republican oil interests. And think twice before voting for Bobby Jindal. [See similar situation in Florida, Georgia, South Carolina regarding Kinder Morgan's proposed Palmetto Pipeline.]

Silverstein ends with a humorous narration of the career of Neil Bush, the son of President George H.W. Bush and brother of President George W Bush. I guess you'll think it's funny if you find humor in the ability of USA blue-bloods to land in money no matter their incompetence.

The book does not offer solutions or best practices. The people interviewed in this book agree that there's simply too much money at stake to care about poor people or the environment.

A large question humanity must answer is whether capitalism can adapt to prevent destruction of our biosphere. This is the premise behind books like Ecological Intelligence by Daniel Goleman and E. O. Wilson's The Future of Life. These liberal environmentalists believe that market mechanisms can be adjusted to delay ecological collapse until technology or human consciousness solves the threats to our biosphere. Naomi Klein's This Changes Everything is more radical in its demand that our entire economic system needs revolutionary change.

I'm tweeting some of tidbits from the book under the hashtag #SecretWorldOfOil. Join the conversation.

Here's an interview Silverstein gave when the book was published.


Bribes, Favors, and a Billion-Dollar Yacht: Inside the Crazy World of the Men Who Do Oil Companies' Dirty Work http://t.co/KnuvGJm8bO
— its mariah x.o.x.o. (@iammariahxo) January 4, 2015

There was a good film about the discovery and development of a gas field in Ghana.


This film gets impressive access to the giddiness of oil deals in #Ghana, and struggle in #Nigeria @Povdocs #Bigmen http://t.co/Nx11qyU4NE
— Anna Boiko-Weyrauch (@AnnaBoikoW) August 31, 2014

If a country has a resource, our corporate partners need to be able to buy it up at a good price. Where the money goes isn't our problem.